Rick Guerin: One of the best in the world

Like many of the ‘Superinvestors’ Rick Guerin never went to business school but that didn’t stop him from managing money. He turned out to be rather good at it and his results speak for themselves. Between 1965 and 1983, against a compounded gain of 316% for the S&P 500 Guerin achieved a return of 22,200% — that’s not a typo. Warren Buffett was quite convinced that Guerin’s education, or lack of it, helped him achieve such lofty returns:

“[The] idea of buying dollar bills for 40 cents takes immediately to people or it doesn’t take at all… A fellow like Rick Guerin, who had no formal education in business, understands immediately the value approach to investing and he’s applying it five minutes later. I’ve never seen anyone who became a gradual convert over a ten-year period to this approach. It doesn’t seem to be a matter of IQ or academic training. It’s instant recognition, or it is nothing.” 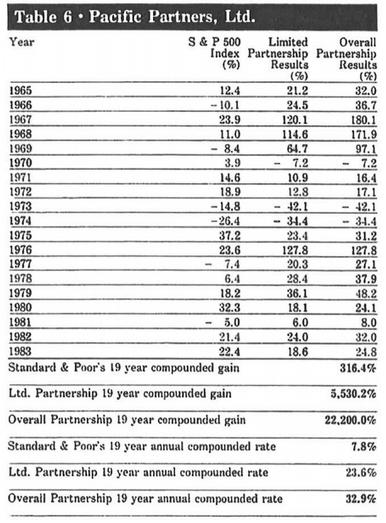 What happened to Rick?

Little is known about Rick Guerin and his style of investing, but after 1983 he virtually disappeared and readers of the ‘Superinvestors’ essay started to ask, “What happened to Rick?” Even Buffett was once asked and he attempted to answer this question by saying that Rick wanted to get too rich too fast. As a result, he used margin to leverage his funds excessively, magnifying both profits and losses. This increased volatility could have been a reason for pushing him out of the money management business.

You can see in the chart above how volatile Guerin’s returns became over the years. Indeed, he suffered a 62% cumulative loss in the period 1973 to 1974 due to high levels of leverage and as a result of these two disastrous years, Guerin’s CAGR collapsed to 3.7% between 1972 and 1977 — that’s a compound return of 19.97% over five years, hardly ‘Superinvestor’ performance.

This site uses Akismet to reduce spam. Learn how your comment data is processed.

This website uses cookies to improve your experience while you navigate through the website. Out of these, the cookies that are categorized as necessary are stored on your browser as they are essential for the working of basic functionalities of the website. We also use third-party cookies that help us analyze and understand how you use this website. These cookies will be stored in your browser only with your consent. You also have the option to opt-out of these cookies. But opting out of some of these cookies may affect your browsing experience.
Necessary Always Enabled
Necessary cookies are absolutely essential for the website to function properly. This category only includes cookies that ensures basic functionalities and security features of the website. These cookies do not store any personal information.
Non-necessary
Any cookies that may not be particularly necessary for the website to function and is used specifically to collect user personal data via analytics, ads, other embedded contents are termed as non-necessary cookies. It is mandatory to procure user consent prior to running these cookies on your website.
SAVE & ACCEPT